An early 20’s female student was dealing with acne the past year. She dealt with acne throughout her teens however it became much more serious and noticeable closer to her 20’s. She would get occasional breakouts here and there, however majority were stubborn acne. So she tried almost “everything”, all the prescribed medications, cleansing products, spot treatments and home remedies, however she was still left with active acne and and more specifically her scars.

To describe her skin, it was a classic acne vulgaris case. However it was inflamed and congested. She had all the possible pimples; whiteheads, blackheads, pustules and cystic. Her most concerned area were her cheeks. It was congested, dehydrated and inflamed. It was also extremely bumpy and had the acne scarring. She wanted to have clear skin without the need of having to put on makeup everyday. But she was unable to apply her makeup well because her canvas (face) wasn’t in a great condition. She then came across Cosmetic Acupuncture, an eastern approach involving Acupuncture and Chinese Herbs.

Her first consultation involved accessing her skin type, daily routine and diet. She was diagnosed with dehydrated, inflamed internally and build up of toxins. (Her treatment period was to go on for 6 consecutive weeks.)

Week 1: She realised her skin was less inflamed and all the small bumps disappeared.

Week 3: Her skin felt much more hydrated and smooth

Week 5: Much hydrated and inflammation reduced 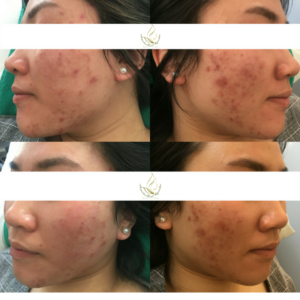 By her second treatment, her inflammation and active pimples was visibly reduced. However, redness still appeared but not as defined as before.

After her third treatment, her skin was feeling much better. Her skin felt much more hydrated and smooth. However, the side effect of taking herbs and getting acupuncture was slight bruising and her pimples were flared up during this time. But she was warned and took precaution.  Although after a few days it diminished and she was only left with the occasional bumps. However, after the third treatment, her skin was much softer, however dry patches and flaky skin surfaced.

After her fourth treatment, not only did most of the active pimple stop, the texture or her skin improved.

At her fifth visit, her skin was no longer inflamed and flaky. It was much more hydrated without any new pimples arising.

On her last treatment, we focused on treating the stubborn scars. Her texture improved rapidly, there was no long flaky dry skin and large bumps near her chin and neck.

By externally doing treatments didn’t completely clear out her skin. It involved her changing her diet and consuming more water. During her treatment, she was also prescribed herbal medicine for her Acne .

Currently her treatment has been a success, her skin has cleared, she is left with acne scars and now she is continuing treatment for the healing of her scars 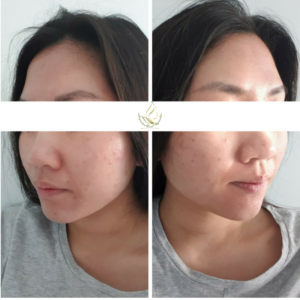 Tips for at home care: